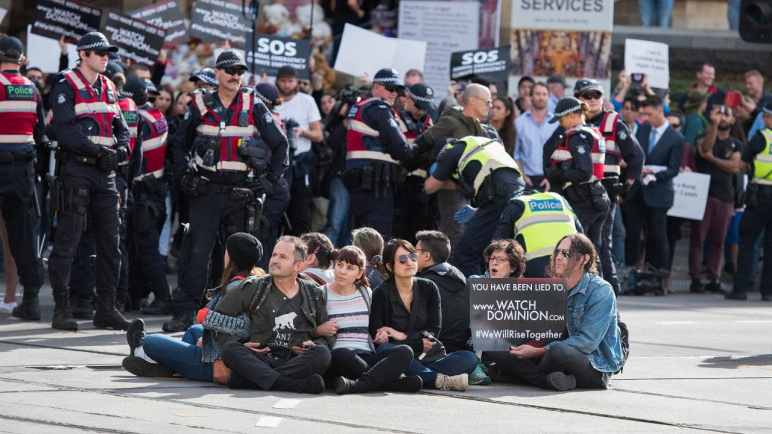 This week has been big in Australia. Never have I seen a protest create so much heated debate! In case you missed it, on Monday 8th April 2019, hundreds of animal activists held a bold nation-wide animal rights action. In Melbourne, they stopped the CBD with a peaceful protest holding signs about the film Dominion, among others, and in other cities around the country, activists chained themselves to slaughterhouse machinery in an effort to stop the processing of animals and bring attention to what is happening to them. This protest catalysed many reactions – many citizens who were frustrated at their day being disrupted, farmers and politicians angry that vegans were speaking out against their practices, and many who were in support, claiming that the action was a much needed wake-up call about the dire situation of animals in Australian farms and slaughterhouses.

The action had me thinking a lot. On one hand I understood the fear of some vegans who didn’t want to be alienated by an action that caused discomfort and anger in people, with the potential for us to be taken even less seriously, and there being damage to the animal rights message. On the other hand, I understood that sometimes creative and bold actions are what get an important message out to the masses, create lots of media, and catalyse some much-needed conversations in the mainstream public. So here are some of those whirring thoughts, addressing many of the different angles of this action –

For those who think it was an action taken too far:
Acts of civil disobedience have been used across time for many social justice movements. This action was a peaceful protest. The activists stood silently, with no signs of aggression displayed at all throughout the event. It may have caused disruption and discomfort to the general public, but disruption does not always lead to frustration; it can also lead to curiosity & intrigue (which it certainly has!). And if it does lead to frustration, negative emotional responses in the audience are not always indicative of negative outcomes. In fact, we often respond with anger, frustration, or discomfort when something confronts our behaviour. & let’s face it – people pointing out to us that eating animals is harming animals and our planet is going to create some cognitive dissonance in most of us – we don’t like being reminded that our behaviours may be wrong. Dismissing the action on this reason alone, that is was ‘too much’, is not enough – sometimes creating inconvenience to the masses is what gets the attention of the masses. Ultimately, this is what a protest is! And the right to protest is a fundamental right in a democracy.

For those criticising vegans:
Careful not to fall into the media rhetoric that vegans are ‘extreme’ or ‘fanatical’. Whether you’re a nonvegan or a vegan criticising the activists who did this – you’re allowed to criticise and question an action. But that’s exactly what it should be – a criticism of the action, not the people. When we criticise the people, we lose sight of the actual issue. Media loves this, they love to create conflict and controversy because it sells. But emotionally-laden words like ‘extreme’, and personal insults, are designed to steer us somewhere else, creating hype and smoke-screening the actual message.

For farmers who think that vegans hate them:
They don’t, they hate what’s happening to animals. And when you see suffering in someone you care about, it makes you angry and hurt, and it makes you passionate to do what you can to make it stop, which is why actions like coming onto farms or abattoirs with cameras are happening. They don’t want to cause harm to anyone, including farmers. They just want to get the message out there of what’s happening to animals.  They also don’t want farmers to be ‘out of jobs’ as some have claimed. They want to support plantbased farmers, and they want to support animal farmers intro transitioning into plantbased farming because this is a far more resourceful and sustainable method of farming that protects the lives of animals, and our planet.

For those who think it was wrong for vegans to break the law:
Currently our laws do not protect most animals in Australia. Animals are being treated in ways that would make most of us horrified if it were happening to our pets at home. But the central problem is – these animals have no ability whatsoever to be seen and heard, unless someone advocates for them. This is how vegans have broken the law – they have gone onto farms/slaughterhouses to attain undercover footage, because the industries themselves will never reveal ongoing footage of how they keep and kill animals. This is the same footage that has made the film Dominion, and the same footage that has made thousands of people around the country feel outrage at what’s happening to animals. When laws do not protect vulnerable beings, we cannot simply abide by them, we must challenge them. This is how we progress in society. Remember – slavery was once legal, apartheid was once legal, the regimes of tyrannical leaders such as Nazis was once legal. Law does not always reflect morality and justice.

For those criticising vegans who are against the protest:
Not all vegans who are against the action are ‘apologetic vegans’ who just want to please the public. Some vegans are concerned that the action could be counterproductive to our movement. While there is nothing wrong with an action being ineffective, if an action is damaging – then that’s a concern worth voicing and debating. We all need to keep critically thinking about our activism without descending into criticisms of each other. We’re all on the same side – we want the same thing. We need to debate effectively.

For those who think the action was ineffective:
In reality, we don’t know what exactly is most effective. Which is why a lot of activism can be experimental. We can learn from social movement theories, from other actions in other movements, but we don’t have the exact answers of what works for this movement. So be careful not to convince yourself that you know wholeheartedly what works and what doesn’t. This can make us blind-sighted.

For those trying to silence vegan activists:
Try to consider why this is. Why silence someone who is asking you to stop supporting animal cruelty? If you are trying to silence these activists, then you are also trying to silence people who are demanding transparency and freedom of information from big industry and our government (who are trying to increase penalties for whistleblowers like vegan activists and criminalise them for showing footage of what’s going on in animal industries). Freedom of information is not only something we all have a right to, but something we should all be on the same side for. Why are animal agriculture industries so dedicated to hiding their practice that they would consider criminalising anyone who exposes it? Showing how they function is something most businesses are proud of – but not animal agriculture. This is very telling. Vegans are also standing against animal cruelty – something we should all be proud to stand for. If you don’t want to be vegan, that’s a different story, but it is taking nothing away from a person to support vegans and their message because it is one that has the intention to protect all those involved – billions of animals, human health, and our planet.

For all animal activists and vegans:
Whether or not you agreed with the action this week, you are all involved. Our discourse around this matters. We will all be the ones approached by friends and family about animal rights and veganism. So instead of dissing others, or falling into ‘us and them’ conversations, remember to keep your focus on the topic. This is an important time rife with opportunity for meaningful conversations about animal rights, veganism, or the film Dominion.

What was this protest about, really?
Currently animals are being confined and killed in horrific ways in a country that prides itself on its animal welfare. Pigs are screaming in gas chambers, mothers are locked in metal cages unable to reach their young, baby cows are being ripped from their mothers. Yet most consumers don’t know what’s going on with these animals- meaning most consumers trust in animal agriculture industries who have (successfully) continued to hide and lie to consumers about what’s happening. And when activists dare to reveal it? The industry becomes aggressive and calls them ‘terrorists’ and ‘unAustralian’. This is what the protest is about – demanding transparency in animal agriculture so they can’t continue to get away with this (which the film Dominion: Documentary shows comprehensively)

Is expecting people to go vegan extreme?
It’s already happening. Veganism is on the rise as one of the fastest growing social justice movements. People are doing it for animals, for their health, and for the environment. Animal farmers may be resistant to change, but change is inevitable when it comes to a flawed system that’s causing significant damage.

Watch the full feature film Dominion for free online: www.dominionmovement.com
This film is written, produced and directed by local animal activists (Aussie Farms) with a majority of footage collected from Australian animal facilities. I have also contributed to the film as a researcher. Lead narrators of the film include film and music celebrities such as Joaquin Phoenix, Sia, and Rooney Mara.

2 thoughts on “The Australia-wide vegan protest: A reflection on the different responses”